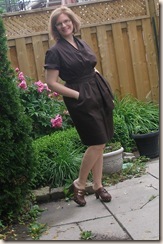 I think this dress should be the “Vogue Pattern of the Year”.  So many people have sewn it up and it looks so great no matter what you do with it!

When Vogue published this pattern, I loved it.  It’s such an interesting take on the eternal shirt-dress, and the little “Donna Karan” details in this make it fun to put together and flattering. 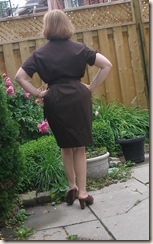 Fabric:  I chose to make this up in a nice chocolate-brown stretch (cotton-lycra) poplin that was – SURPRISE!! – at my local Fabricland.  Now, maybe that’s not really a surprise, but the Fabriclands in my area rarely carry really nice stuff and I was pleasantly surprised by the lightness of this fabric and the tightness of the weave.  It sewed up beautifully.  I can’t wait to see how it wears.  Here’s the back view.

Notes:  This pattern went together easily.  It’s rated “average”, and I would definitely agree with this.  There’s enough work in here to make it a day-long (or more) project and little things that require accurate markings and attention.  This is perhaps not a project to finish or work on while you’re sleepy.  The pattern markings were accurate and went together nicely, but there was one step in the instructions that threw me for a bit.  And I have to confess it’s probably due to my laziness.  You see, I will sometimes just glance at the picture instead of reading the instructions and continue on that way (maybe that’s why I have such trouble with Burda magazine’s instructions – I have to read and re-read them sometimes!) 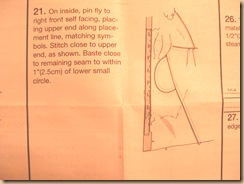 Anyhow, the drawing of the button fly vs. the length of the facing in Step # 21 had me wondering, what the heck?  When I pin basted the fly into the facing, it was as long as the hem – and it’s not the case in the picture!  So I had to check the pattern pieces and realized that the drawing is wrong.  Go figure. Oh well, it’s the little things such as this that make me pay attention!

I bought the required yardage, but there wasn’t quite enough to cut the tie in one piece, as instructed, so I put a French seam at the centre back of the tie.  I don’t know if the yardage shrank in the prewashing…  But it’s just as good as cutting it in one piece.  The other issue I had was setting the sleeves.  Has anyone else had this problem?  I don’t think I’ve ripped out and re-set little 1-inch sections of a sleeve head so many times in my life.  I just could NOT get the ease to work smoothly.  Perhaps this was a quirk of my tightly-woven cotton?  Anyways, I ended up pin basting the sleeve about every 1/8″, which is not something I usually do.  This probably doesn’t reflect on the pattern, but it was really annoying after about the 3rd time.

On a final note, I think I’m really going to like this dress.  I’ve always wanted a shirt dress, and this is the first one I’ve had in my closet in about 10 years.  Actually, it’s the first self-stitched one ever!  I’m thinking this might be the summer of the shirt dress in my life.  I’d really like to tackle the Chado Ralph Rucci take on it.  Maybe I’ll be ridiculous and actually make it in a silk taffeta.  How’s that for totally impractical? 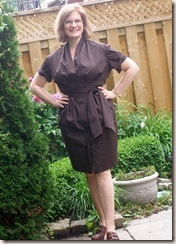