I thought I’d brag on my eldest daughter here for a bit.  She has been teaching herself to crochet for the last year or so, and what with our decision to make gifts this year, has been working hard and is really becoming quite proficient!  Case in point:  a scarf for my SIL, her Tia Luisa.

I’m trying to convince her to post pictures of her creations on Ravelry, since I have friends who knit and would be interested in seeing what she does.  So I offered to model the scarf for her today to get pictures for her to upload. 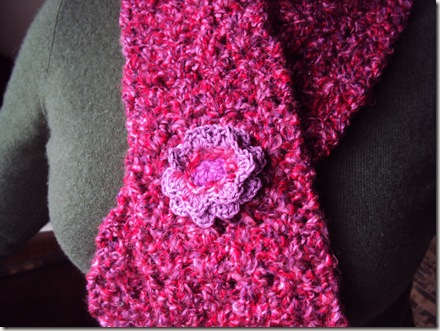 I have no idea what the name of the pattern is or what kind of wool she used, but I do know that the flower is cotton.  It’s very pretty, and I must say I am impressed.  And from earlier this fall here’s another example of her work.  She finally finished up a lacy tank made from mohair lace yarn and cotton that she’d started in May, I think.  It took a long time, as the pattern was a bit more difficult that she was used to following.

It was freezing the day we took this picture, but she said she was warm in this cowl-necked tank.  She has worn it a lot, and I think the comments and encouragement she’s recieved has convinced her crocheting is rewarding.  I know she’s planning to knit little fingerless gloves for my nieces, a little hat for the nephew, another scarf in blue for Vôvô (DH’s mother), and something for me.  She hates to sew, BTW.  After making her dress last summer, she has decided she’d rather clean the house than sew up something to wear.  And she thinks the “crocheting thing” is a passing fad in her life.  Time will tell!

P.S.  Have you noticed it’s snowing at WordPress?  It’s totally cool!  I wish it would snow here….. 😦