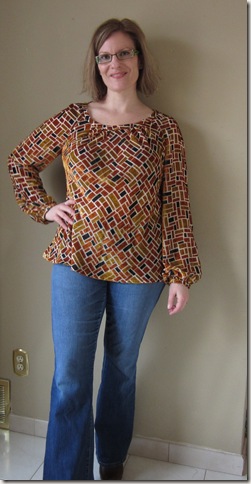 I’ve discovered something completely unexpected: sewing up my stash is actually quite satisfying. More satisfying at this point than planning new purchases. I never thought this would happen. I often get overwhelmed by the sheer number of design/pattern choices when I want something new. Add to that the completely insane amount of choice for fabric and I often get paralyzed before I begin. But not so far this year, as I’ve decided to limit purchases to notions, lining if necessary, my Burda subscription, and any designer or Vintage Vogue pattern that may be unusual or worth collecting for future. And it’s been a lot of fun finally getting around to some projects that have been in my queue for years. And I mean years. Take this top, for instance. The fabric was purchased in the last century with the intention of making a tunic, and I finally got around to sewing it up. It’s amazing what a few boundaries do for productivity.

Did it look like the photo/drawing on the pattern envelope once you were done sewing with it? Absolutely, except for my changes.

Were the instructions easy to follow? Yes. The instructions for this are particularly easy to follow and well-written.  Just be aware, though, that there is no pattern for the pockets.  I think they forgot to add them.  I didn’t put the pockets in because I just wanted a short tunic top, but I’m sure it would be simple to draw your own, or steal a pocket pattern from some other design to use.

What did you particularly like or dislike about the pattern? I really liked the front pleats and the sleeve options.  I left off the sleeve ties because they’re just frankly annoying, like I’ve mentioned in other pattern reviews.

Pattern alterations:  I actually stole the neck band pattern from 4-2011-136.  I didn’t want a bias bound neckline because I cut the front and back on the bias.  I liked the look of the fabric better on the bias than the straight grain, although I did cut the sleeves on the straight grain.  Because of the bulk of the velvet, I didn’t turn under the edges of the neck facing and slipstitch it.  I did understitch the facing, which isn’t called for in the pattern, but it prevents it from rolling around.  I simply finished the raw edge of the facing and pinned it into place with all seam allowances turned inside.  Then I stitched it place by hand using a half backstitch.  I didn’t want any stitches showing from the right side.  You can see the details below.

I like this pattern.  I’m glad I cut it on the bias – it skims along instead of hanging like a sack, which I think it would if cut on the straight grain.  And the raglan sleeves fit perfectly without any fussing, basting or tweaking, unlike any other set-in sleeve of Burda’s I’ve sewn.  If you’re looking for a simple casual top or dress, this is an easy pattern with several sleeve variations to suit your fancy.