Sleeveless version, that is.

This is the first sleeveless white shirt in my closet. Ever. I’ve never wanted one before. And I don’t particularly like them. But they’re growing on me when I see other people wearing them. So here’s mine! I used Vogue 8094 again. I’m certainly getting my money’s worth out of this pattern. I’ve made the capris, used the capri pattern to alter a previously me-made pair that I disliked, and now I’ve made the shirt. I have to say I did make the 3/4 sleeved version years ago out of Liberty Queensbury, and would love to have another Queensbury shirt, but I can’t find the fabric anymore. On my first version I hadn’t learned yet how to do an FBA, and I really needed one.

For this version, I used an ivory cotton/linen blend, I think. It’s a bit heavy and 100% linen it certainly ain’t. I’ve never seen so much lint in the dryer filter after pre-washing and drying linen. I could have sufficiently stuffed a baby pillow with it. It was ridiculous. 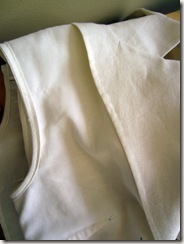 And I underlined it. Even though it’s a mid-weight fabric, you could still see skin versus pants through it. I used cotton voile, and, flimsy and sheer though that fabric be, it does add that extra coverage layer. And just to test it, I wore a dark brown bra for these photos. Pretty good, eh?

I love the collar on this shirt. I think the fabric makes it roll perfectly.

I had intended this to be a quick project. HA!! Classic white shirt does NOT equal fast and easy. I didn’t do a muslin – just did the baste and fit as you go method. The front fit beautifully after doing my usual FBA.

The side darts are pretty deep – not quite deep enough from the photo below – and I was concerned about how they’d shape. Sometimes I like to split up a very deep dart into two or more smaller ones. I think next time this pattern gets made I’ll do the smaller darts because it’ll make the shape more pleasing. Don’t get me wrong! I’m quite pleased with this shirt, but as you all know, we sewists can get really really picky over anything that doesn’t fit perfectly. 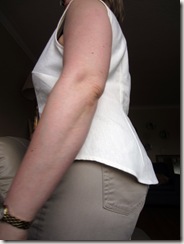 And I think I’ve developed slightly sloping shoulders over the years. Jeepers. I wasn’t expecting my shoulders to drop as I age. This is slightly more evident in the mandatory back view of the shirt.

The front and back darts are very long in this pattern. Necessary, I guess, to obtain the fit that drew me to this pattern in the first place. And I’m not crazy about the five buttons. The last one just seems like one too many, so I’ll probably wear it unbuttoned. I’m short-waisted enough that it won’t make any difference.

10 thoughts on “The Classic White Shirt”