This is my third pair of capris currently in circulation from Vogue 8094, and I promise I’ll make up something new and exciting from a different pattern for my next post!  But I love chocolate brown – it’s the black in my wardrobe – and I wanted a pair of capris in this staple colour for my summer days! 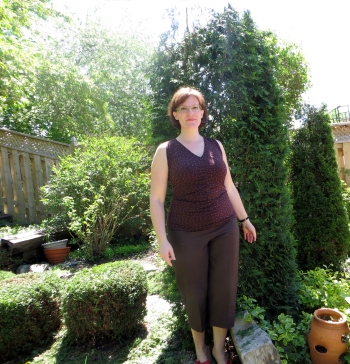 There is nothing new that I have to say about these except that I put a crease in the legs for something different (not being super creative like some of you, I couldn’t come up with dyeing, embroidery or applique that would have suited my rather conservative tastes) and left the zip at the CB. I think I’ve almost got the fit nailed on these, too, compared to the previous two pairs, which I shall alter to mimic the fit on these.  This is the mandatory front mug shot.  I still have to figure out how to get rid of the extra fabric across the front of the crotch. I must say it’s more horridly noticeable while standing stock straight for fitting purposes than it appears to be in the rest of my “living” pictures.  *sigh*

And the back mug shot.  This pair’s fit is much improved from my previous pair.  Not perfect, but we’re getting there.  I cannot believe how much adjustment to the crotch is necessary on these casual pants.  I have never had to do this much tweaking and adjusting and crying and leaving-them-alone with dress pants. 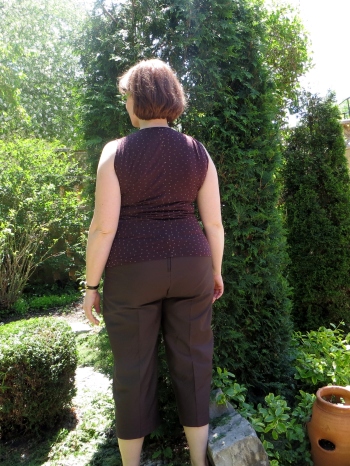 It’s been a learning process, like all of my sewing, and I’m was rather encouraged this morning after scooping out MORE of the backside.  I’ll be scooping more on the green ones I made yesterday, too.  And the original rust-coloured ones.