This is my take on The Top 5, since it was honestly my focus for the last year. However, not meeting goals is an unhappy occurrence in my typically driven mind, and I have had to temper my desire to throw tantrums whenever thwarted in pursuit of this 2013 goal.  Mostly because growing emotionally healthy and responsible citizens for the next generation means that modelling desired behaviour is priority.  🙂  I’m just being selfishly honest!

So I’m going to vent here, where probably – most likely – almost 100% – no one will be adversely affected by my pouting because I didn’t meet my ONE BIG GOAL for 2013:  sew at least one garment from each issue of BurdaStyle.  I missed the mark by two issues:  May and November.  In my mind this equals a failure (and DH has already raked me over the coals for calling it a failure considering how many other projects I finished). But to jog everyone’s memory, back in March, I wrote this:

Maria over at La Inglesita posted back in December about her goal to sew at least one garment from each issue of Burda for 2013 since those issues often sit on our shelves and don’t get traced and sewn up into wearable 3D items.  I don’t know about you, but often I’ll read and re-read a Burda issue, earmark one or several things and mentally sew them up in that particular fabric from my stash.  Heck, I’ll even mentally wear them, but it gets left behind in ISL (Imaginary Sewing Land) for some weird reason. Melissa at Fehr Trade set herself a similar challenge last year. It’s a nice idea and perhaps the impetus that I need to sew up the things that catch my eye in my Burda subscription, so I thought I’d casually join along.

Re-reading this, I was surprised at the last sentence, because, quite frankly, finishing this challenge has turned into an obsession over the last 6 weeks.  But let’s see how close I came, OK?  You can click on the images to take you to the original blog post, if one exists.

January: Polka-dot Top and a Leia costume for DD2 (unblogged) and the Sequin UFO 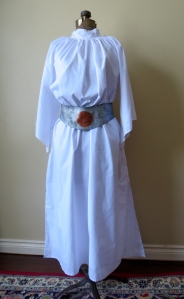 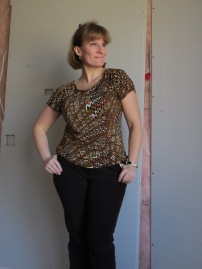 March: This was the most-used issue this year by far:  six garments in total, and two of my most-worn and favourite garments came from this issue.  Two are unblogged (one was a wadder due to a bad fabric choice (trousers #127) and the other is finished, but not yet dyed.  Yup.  I made a shirt (#124) as a fitting and dyeing experiment.  But the dyeing hasn’t happened yet). 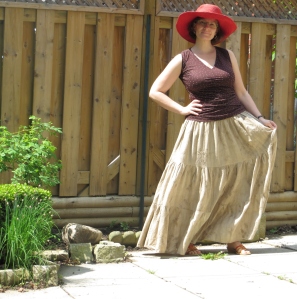 Two garments for others came from the March issue, too:  a dress for DD1 and Miss V’s lace shirt.

May: Well, I’ve traced off a couple of dresses, but that’s as far as I got on those.  Hopefully in the spring, if nothing new and exciting comes along before I get around to making them.

June:  A pair of shorts.

July:  A top.  I actually made this top twice.  The first version was a recycled version of this dress but I didn’t like it, so I sent it to the garbage.  So much for recycling.  But DD1’s turquoise top is very pretty.

August: Nada.  Well, nothing that I kept.  This is a wadder.  I love the idea of the integrated wrap scarf, but my fabric choice of lightweight rayon jersey was not good.  I wore it for the day I took this picture, and haven’t worn it since. If I ever find a T-shirt type of jersey, I may make this up again.  There was also a skirt and a jacket from this issue that I wanted to make, but I just ran out of time!

September:  One skirt, unblogged.  It’s model #130, designed by John Richmond.  And I must say that I love it.  It’s pegged and perfect.  My version is made of a heavy washed 100% ramie fabric that caught my eye back in the spring.  The pattern is like a Vogue designer pattern, with instructions for lining and facing and finishing it perfectly.  The back (below) is princess seamed with small kick pleats at the bottom of each princess seam.  It’s a gorgeous pattern.

October:  Three garments from this issue:  DD1’s camo dress and her NYE sequin skirt; and a pair of trousers for moi (not quite finished at point of writing, but will be, because I have to wear them tonight!).

November:  Nothing – Fail!  I would love to make up a skirt and two dresses from this issue, but guess what?  I ran out of time!!

I did make a couple of other garments from other years of Burda, but this challenge was about using the patterns that come each month with my subscription.  I made up a total of 23 garments, including the wadders.  It was a good challenge, and I am happy that I mulled over each Burda issue, trying to find things that looked interesting to make and that would suit my lifestyle.

I don’t think I’ll be doing a Burda Challenge 2014, however.  I set aside several Vogue patterns, my Little French Jacket and a winter coat in order to keep on top of this challenge, and I would like to go back through the stash and marry the patterns with fabulous fabric for these projects.  Y’know, bring them up to the front burner.  And I would like to do SWAP again.  I am so happy with all the garments from my first SWAP in 2012 that I’d like to repeat the challenge again.  But that’s thought for next week, at the earliest!

And that’s the end of my 2013 posts!  A very happy happy New Year to each and every one of you.  May the year be full of excellent fabric, good fitting, and endless hours to create to your heart’s content!