A construction jungle, that is.  STILL.  And since I’m being slowly eroded with the endlessness of this project, I sewed up a little bit of animal print to help me feel at home in the mess. This lovely little ensemble accomplishes three things:

My ensemble is the designer pattern from Jo No Fui (Burda 11/2013 #130).  I made it up in a black stretch wool suiting for the skirt and an animal print silk charmeuse with an all-over fleur-de-lis burnout pattern for the blouse.  Let’s talk about the skirt first.

I was a bit skeptical about the extra yardage that drapes at the CF, but I like it. It doesn’t add bulk to the silhouette – it’s very clearly a pretty drape. 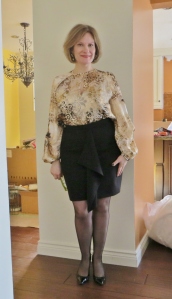 The wool I chose is perfect for this – it’s about the weight of a heavy silk crepe – and sewed up like a dream.  There is a small hip yoke piece instead of darts in the front.  The CF seam is sewn wrong sides together with the drape finished beforehand.

The back of the skirt is simple.  It’s short – only about 19 inches in length – and cut straight.  I added a waistband instead of the facing, pegged the bottom by a total of 4 inches and added a full lining.  I likey this skirt. 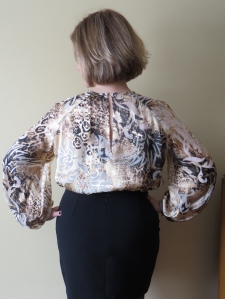 And now the blouse.  Of course the star feature is the sleeves with the deep 4 inch pleat to keep the excess fabric at a decent length.  As it was, I decided to shorten the sleeves by 3 inches in total just to avoid the potential of dragging through dinner or what have you.

I added small squares of organza on either side of the pleat for stability and strength. I don’t want those tacking stitches tearing a hole in the middle of my sleeve, thank you very much.  The bottom of the sleeves are gathered into a narrow binding that just barely fits over my hands.  I’m not complaining – I actually like the smallness of the opening.  I think it will help keep the sleeves at my wrists.

The instructions for binding the CF and CB slits were just asking for punishment, as far as I was concerned.  The binding strips were cut on the bias, and I should have known better and just cut them on the straight grain like one would finish a placket.  But what the hey!  I finished the neckline entirely by hand because of the finicky quality of the bias, but mostly because the charmeuse handled differently than the burnout chiffon sections in the fabric and it was just simpler to do it by hand instead of swearing at my machine. 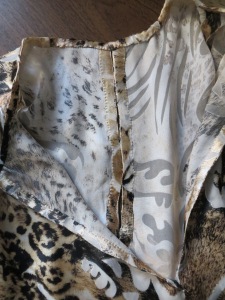 The back binding extends into a loop for a button while the top of the CF slit is completely bound by the bias.  It’s a low opening, too, despite the high crew neck.

I had initially thought I’d make up a Ruby camisole in the same fabric for modesty (chiffon sections of the silk) and to prevent wardrobe malfunctions with that CF slit but the crossover of the cami doesn’t quite do the trick at this point.  Some adjustments are required before I actually wear this ensemble out in public, and I will probably also sew the bottom inch of the slit closed. 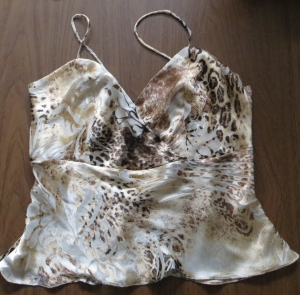 As you all know I was a little sewn out after (almost) completing the Burda Challenge 2013, and although I want to finish it (yes, I’m that stubborn), I have a long queue that I’d like to catch up on from the last couple of years that has been pushed aside to make way for other projects.  And a lot of fabric that I would love to wear.  These are the more immediate items that come to mind:

So after sifting through all these nebulous ideas wafting around my sewing room, and reading through Ruth’s post on the SG’s Algebra SWAP 2014 rules, I realized I could fit everything in my year(s)-old queue into a lovely little plan. The more I thought about this little SWAP, the more it gave me the impetus to start sewing after the December rush and holidays.

And this little ensemble has started me off beautifully.  But more on the SWAP in my next post.

30 thoughts on “it’s still a jungle in here”