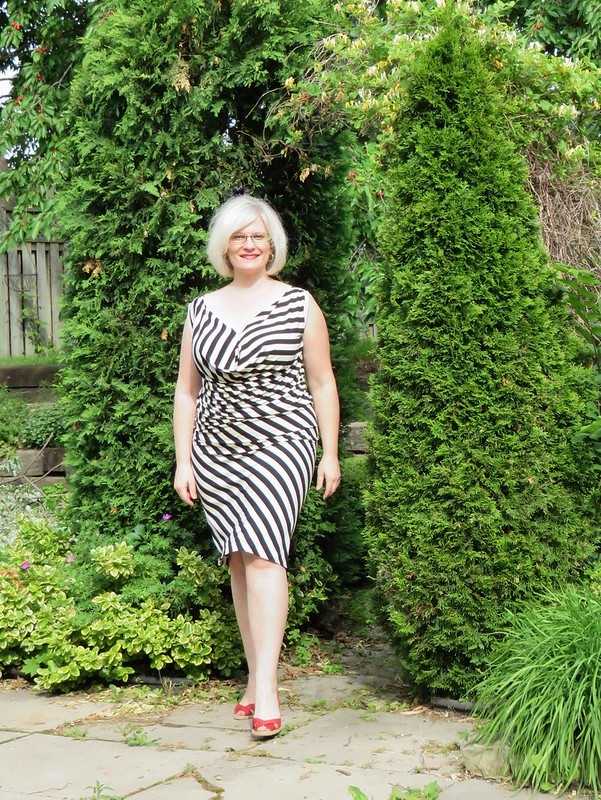 I’ve had this lovely black and cream striped rayon jersey in my stash for about a year, and I wanted to make something unique or unusual with it.  After seeing Allison’s striped top I went on a hunt for a design idea for this fabric. I had a little more than one yard of 60″ fabric and I hoped to get a dress out of it, not just a top.

If I had any degree of creativity or technical skill, I would have tried draping this fabric in an homage to Vivienne Westwood, but I don’t, so I hunted through patterns and landed on Vogue 1282.

I know.  Not very adventurous, but I had just finished making it up in a roll-end from EOS in a dark dijon rayon knit, and wondered if it would work in a stripe. I thought perhaps the excess fabric below the waist in the top would be perfect in a lengthened dress version, creating visual interest with the stripes, and hiding fluff.  Then I stumbled upon Ellen’s version from a couple of years ago that had a subtle stripe and it decided me.  I picked laid out the fabric and the pattern…. 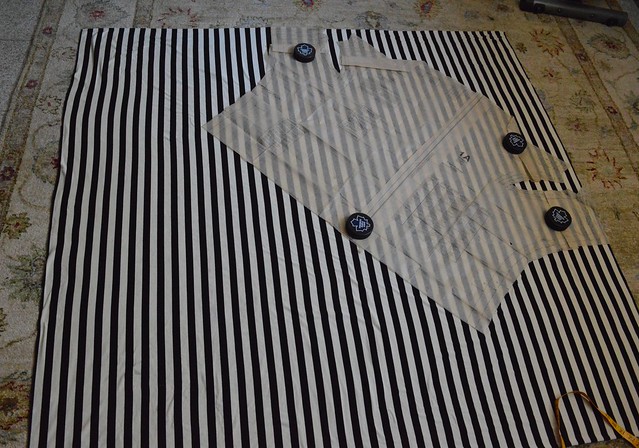 ….. and shortened the bodice above the armscye (because it sits very low) by about 2 inches (5 cm), instead of just adjusting it at the shoulder seams during construction, as I did for the top, and plunged in with my cutting shears. 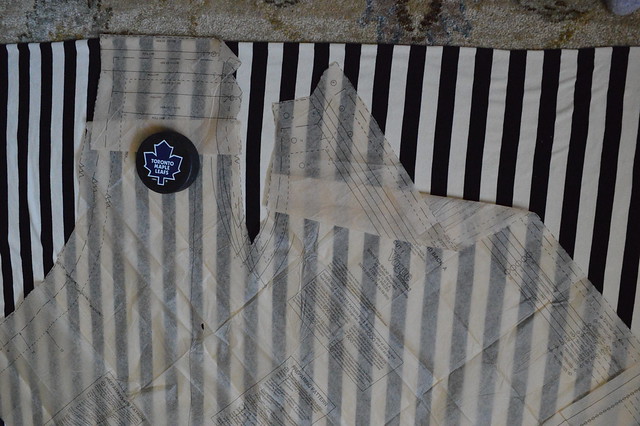 Instead of facing the armholes, I cut strips of fabric on the cross grain, one stripe-width finished width and left them as an extended edging.  It completely changes the fit of the pattern since they act as little 3/4″ sleeves.  It means the neckline sits at the outer edge of my shoulders instead of close to the neck, and results in the front drapes being a bit wider/shallower instead of narrow/deep.  But it also means I don’t need bra strap keepers and the shoulders are stable.  And it creates an asymmetrical look across the top, as the binding extends the vertical stripes on the right, making it look wider than the left.  Just one of those quirky things that are currently endearing this dress to me at the moment. As for the CF plunge, I’ve discovered a new little trick:  use a bobby pin to pick up one or two seam threads and clip it to the centre bridge of my bra.  Nothing moves.  Brilliant! 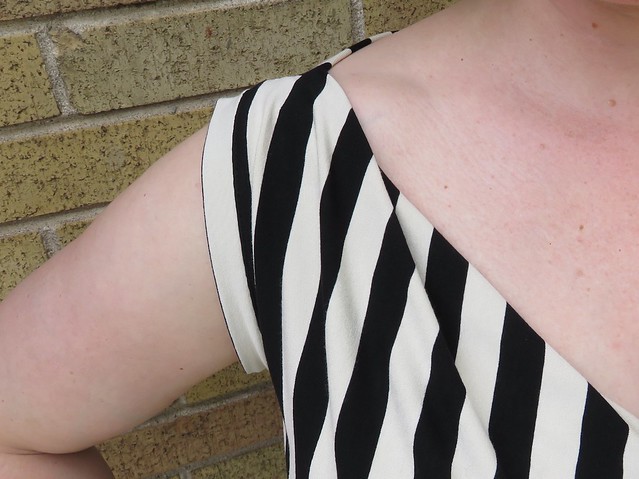 I honestly wasn’t sure about this, but after seeing the pics (mirrors lie, y’know) I like it, but some details bother me.  For instance, the lack of stripe matching on the CF of the drape. 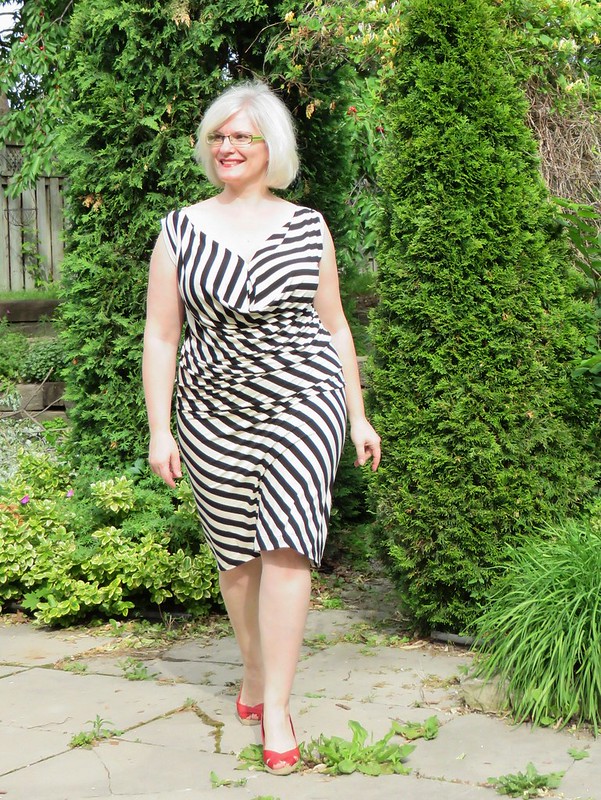 And again down the CB seam. 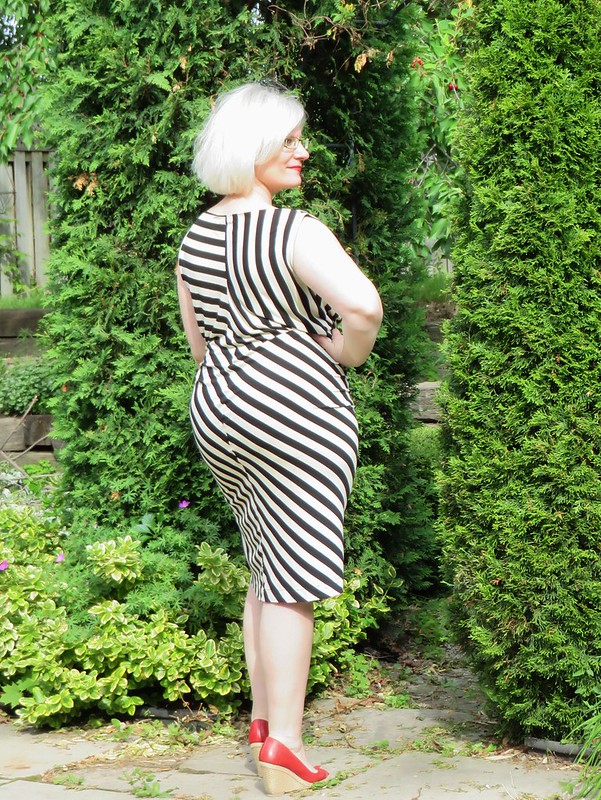 Try as I might I just could not match up those stripes without creating weird alternating patches of easing and stretching which refused to lay properly and looked terrible down the back of the dress. 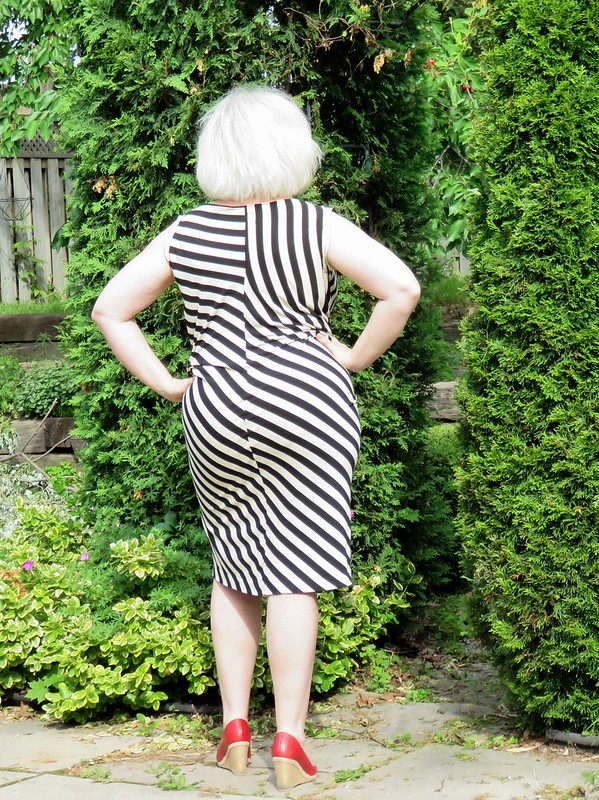 Similarly, if I match the stripes on the front drape, it will mean one side is longer than the other and sits at a different angle.  But my inner seamstress/perfectionist is squirming looking at these photos!  So, because I’d like your opinion, I’ve created a poll to either leave it, or fix it.  It’s anonymous, so please be brutally honest.