I, for one, am very glad the last decade is over and gone, particularly 2019, which has been the culmination of a difficult ten years.

This last year hasn’t had much sewing for a variey of reasons, and the sewing that I’ve done hasn’t gotten properly photographed, or wasn’t photographed at all.  Some of it hasn’t even been worn… like a pair of jeans made from this fabric, for one.

It’s been a year of challenges and good things.  I thoroughly enjoyed my French classes every Saturday – my heart was singing every time I drove home – but that came to a screeching halt in May due to health concerns.

I made a few tunic tops from linen and cotton voile that had been lingering for years in my stash. 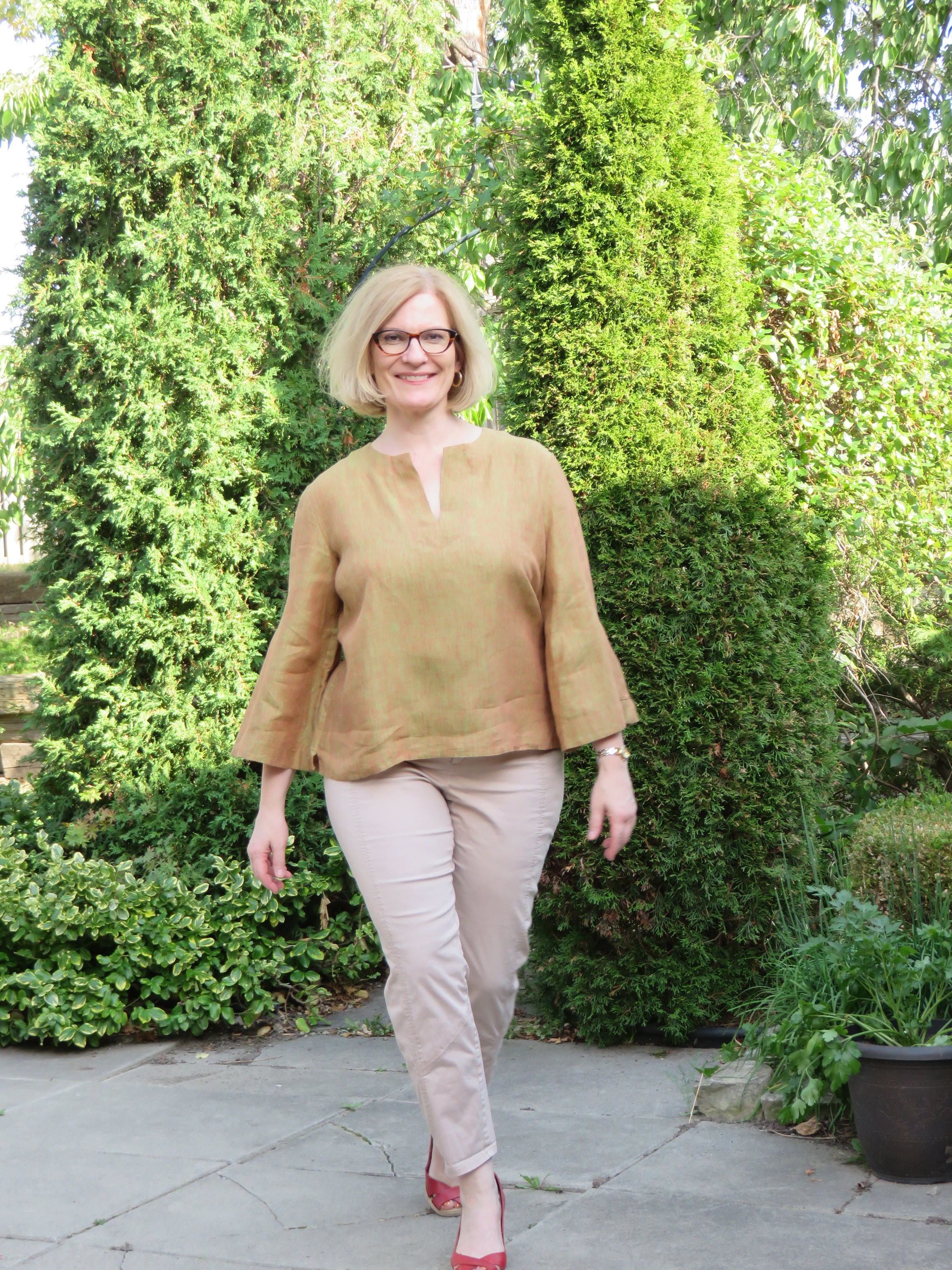 I cannot remember when I purchased these fabrics, but I do remember where! And the tunics are thanks to Anne’s make for one of her daughters, which reminded me I had had a keen interest in the Burdastyle pattern every since it was released in February 2018.  It felt good to just get on with the projects and get them sewn so I could wear them. Impulse sewing. 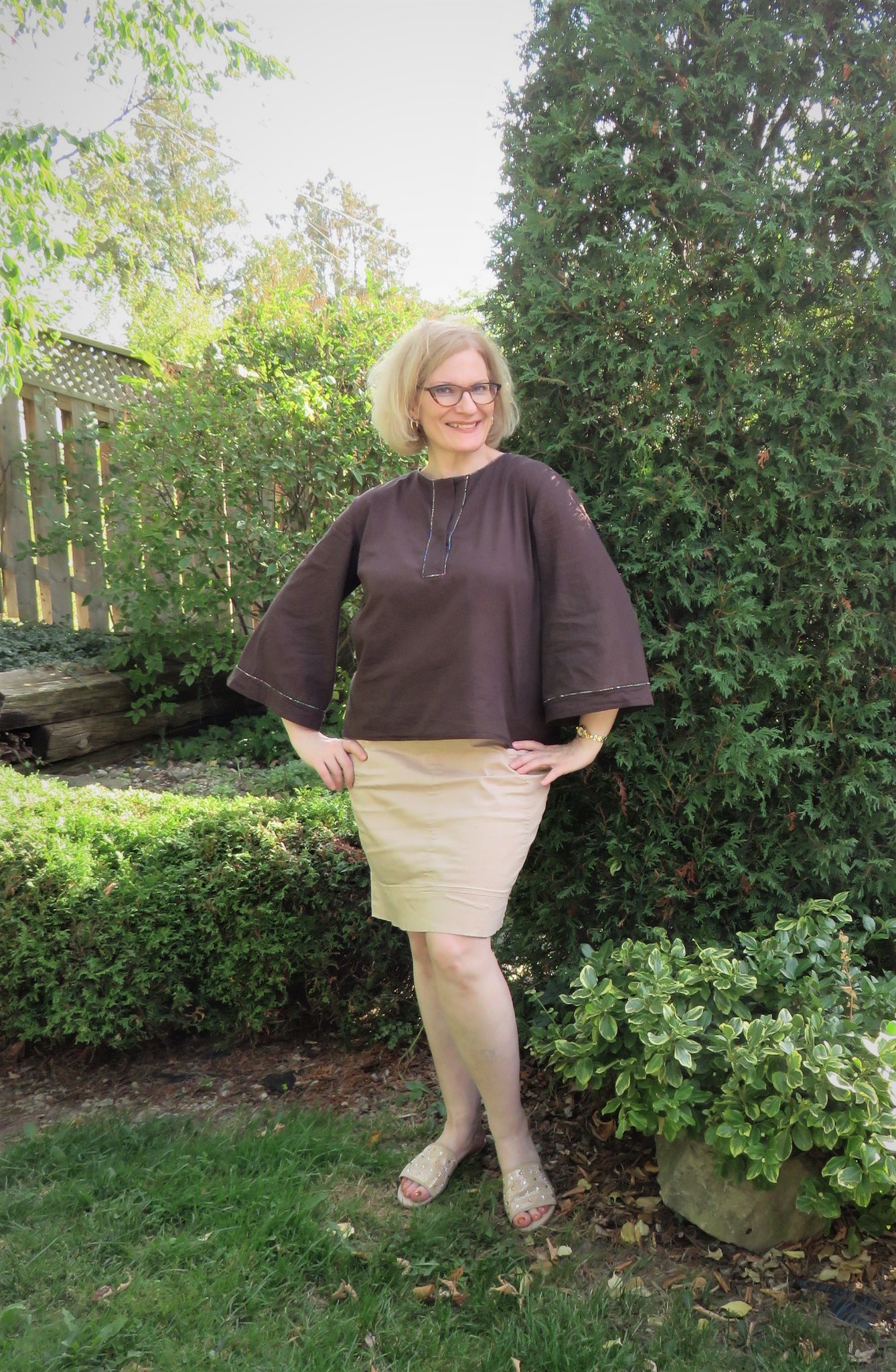 The summer went by quickly – too quickly – with so much stress at an unfullfilling job as we rolled out a new website, with little or no time to sew, and no mental energy left if there was time.  We had a family wedding to attend in August, and I literally had nothing to wear that would fit my growing waistline, so sewed for 5 days straight, letting everyting else in the household go to pot, while I made this unsuccessful attempt to copy a spectacularly beautiful Dolce & Gabbana green velvet dress (which I cannot find anywhere except in print advertisements).

Of course I washed it afterwards (I always launder my own clothing, if I possibly can, instead of sending it to the toxic dry-cleaners), and the hem went wonky, mostly because I didn’t support it with flannel bias underlining.  So it’s still hanging up, waiting for a do-over, or alterations, or disection and reincarnation.  Then everything came crashing down in October, when I became an ostomate and was diagnosed with Stage III colorectal cancer.  No wonder my waistline had been expanding so I had nothing to wear to the wedding!  The sad part was, even as I was waiting for emergency surgery, all I could think about was, “Thank God I don’t have to go to work for the next few weeks.”  It took me until the third week of recovery to realize the shocking absurdity of that being my first thought, given the situation.

I have had so many ideas going through my head for sewing over the last three months, and no energy or mental strength to do any of it until this past weekend, partly due to recovery, partly due to rethinking so many parts of my life.  I guess coming face to face with a potential death sentence sooner than you expect does that to one’s thinking.  Re-evaluation and change are inevitable. Crossing the half-century mark in December brought several things into sharp focus, too, as a milestone will.

When I first began this blog a decade ago, it took a lot of courage to post pictures of my makes out there for the world to see, despite the fact that I’ve been wearing them since I was in my teens on a daily basis.  It was so much fun for the first few years, but slowly negativity crept in from voices close to me, and the joy of making disappeared into the pointlessness of making garments that were not likely to be worn, given my lifestyle of a SAHM.  That negative voice was given it’s proper perspective, although it is, unfortunately, not silenced, and still a part of what I hear now and then, through an excellent support service provided to my dear daughter #2, who has Down syndrome. It was her crisis that brought me the help I had desperately needed for years.

Two years ago I was introduced to the concept of choosing a defining word for each year.  In 2017 it was ‘baby steps’ for me: baby steps forward into independence of thought and being; baby steps into health and freedom.  Last year I struggled with a defining word, although ‘commitment’ was persistent, particularly because I really became aware of how making decisions is easy, but follow-through is difficult due to constant reassessment – sometimes hourly – on my part.  ‘Courage’ became a rallying cry, too, early in the year, due to a friend’s struggle and hardship as she watches her husband disappear into the void of aggressive early onset Alzheimer’s.

And this year, I wasn’t going to bother thinking of a word, as I just want the next 6 months to have good reports and scans and results, and learning to look after myself (even at the expense of others’ demands) is still a daily decision and takes a lot of my strength and courage.  But this quote really reverberated with me a few days ago, attributed to Muhammad Ali:

“He who is not courageous enough to take risks will accomplish nothing in life.”

That is my word for 2020. Here’s to taking risks in sewing up my stash and sewing up patterns I’ve wanted to sew for years, regardless of their ever getting worn or used. 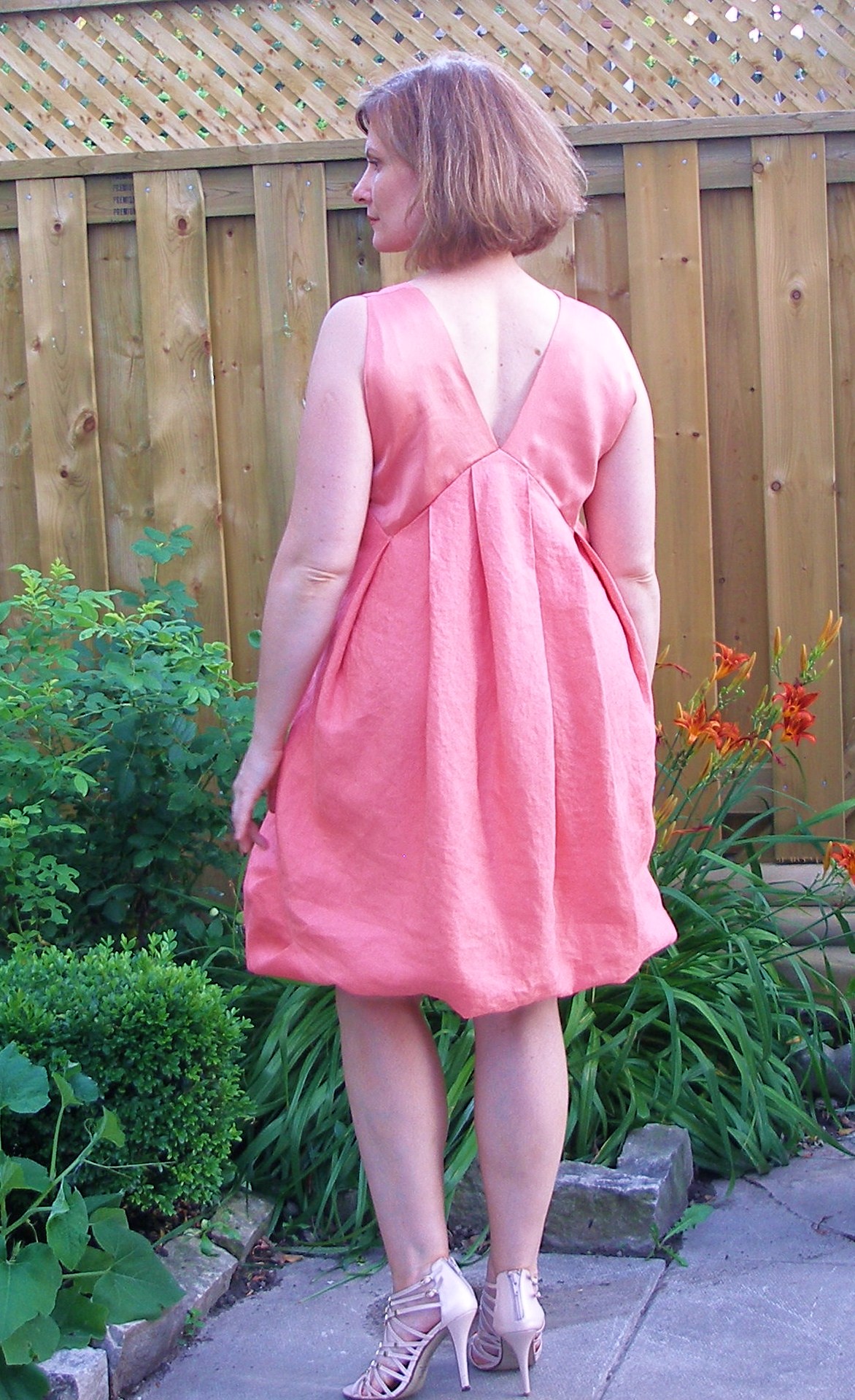